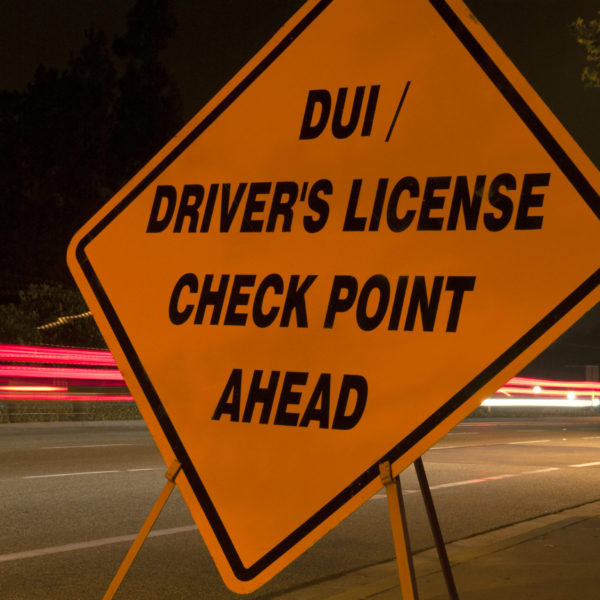 I’m disheartened at how little push back there is in this country of checkpoints, roadblocks, checking stations – whatever you want to call them.  We have all seen them – you are driving down the road and all of a sudden, there is a backlog of traffic – it looks like there has been a big accident up ahead.  You pull forward, and a cop stops you – he or she is polite enough, looks you over, shines a flashlight through the inside of your car and at each of your passengers, asks you where you are coming from and where you are heading, and usually wants to see your drivers license and registration.  Maybe the whole thing only lasts 30 seconds – or maybe the cop gets a sniff that you are doing something – anything that is against the law – in which case, you get moved to a secondary spot in the checkpoint for further investigation.

So whats the big deal?  If I’m not breaking the law – I have nothing to worry about, right?  If that is the case, why not have police officers go door to door as well – just to check and make sure that we are abiding by the law in our homes.  The big deal is that we live in a free country – or at least we are supposed to.  We fought the fight over general warrants over 200 years ago – and we won.  Why are we so willing to give those liberty interests back now?

The Supremes have weighed in on this issue several times – and basically have said that Checkpoints are permissible IF …..

The IF has to do with the purpose for checkpoint and how its conducted – but the practical effect is that the Courts, absent some pretty egregious circumstances, tend to side with the State on the validity of their checkpoints.  I see lawyers look over checkpoint plans and forego even having hearings on the issue because they know the Court is going to give the State a pass.

Here is the real kicker.  Checkpoints do not work.  In Wake County, most weekends you will see – somewhere in the county – a multi agency checkpoint forcused on DWIs.  This means that Raleigh, Cary, Garner, Apex, Fuquay, Knighdale, WCSO, and even the Highway Patrol (among others) send a few DWI focused officers to spend 5 or 6 hours stopping every car who pulls thru and make sure the driver is sober.  There will be 20 or more officers, a magistrate, an chemical analyst, and the “batmobile” (a bus with a few breath testing machines) on site for hours.  How many DWIs is a checkpoint like this going to nab?  20?  30?  Not even close.   At the high end, a checkpoint might get 10 and usually the number is more like 2 or 3.  They will get to write other tickets – driving on an expired license, no seatbelt, maybe they get a weed bust – but the purpose of the checkpoint isn’t achieved at all.  Consider this – those DWI focused officers – and every agency has a few cops who make DWIs their personal mission – they generally average one DWI arrest per night just by driving around and looking for them.   They can catch more drunk drivers by enforcing the law constitutionally than they can by stopping everyone who comes thru a checkpoint.

So why do they waste their time with checkpoints when they are so much more effective on patrol?  Money.  The Federal Government gives local agencies money so that they can buy all their cool equipment as long as they put up these checkpoints every so often.  The feds don’t care how many arrests come out of them, only that they are conducted.  Tax money well spent, huh?  I have heard the argument that checkpoints deter drunk drivers – even if they don’t catch them . . .  Malarkey.  That assumes that drunk drivers use reason and common sense in formulating a decision to get behind the wheel – which, of course, they don’t.

The bottom line is this – we aren’t supposed to live in the country where we go thru checkpoints and have to show some authority figure our papers.  This is the land of the free – and that is only the case because of the limits that the Constitution places on the government in how it deals with the citizenry.  We the people need to police those limits.  Freedom is like a muscle – if you don’t flex it now and again, it withers and atrophies away.